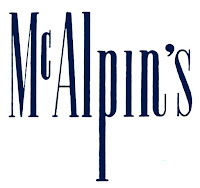 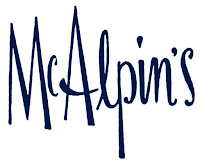 McAlpin's, one of Cincinnati's favorite department stores, was officially founded in 1852, when Cincinnati native George Washington McAlpin (1827-1890) became a partner in the Wholesale firm of John W. Ellis & Co, and the firm changed its name to Ellis, McAlpin & Co. McAlpin, one of three sons of Glasgow native Andrew McAlpin, attended Woodward High School and Cincinnati College before embarking on a business career in 1842 at the wholesale house of John Taylor in the Queen City.

In 1880, the company moved to a 5-story building at 13-17 West 4th Street, formerly occupied by the John Shillito Company.
George W. McAlpin lived at a capacious mansion at 318 Lafayette Avenue known as Oak Hall. In addition to directing his own firm, he was a member of Cincinnati city council for 15 years, and a director of the First National Bank in his home town. McAlpin died on April 20, 1890. He had been in Old Point Comfort, Virginia, visiting his daughter, where he contracted a cold. After his return to CIncinnati he died suddenly at his home.

George McAlpin's younger brother WIlliam took over the company and in two years, converted it into a combined wholesale and retail firm. McAlpin's prospered under the Yale-educated William, who was for 16 years head of the Cincinnati YMCA and also served on the board of the University of Cincinnati. In 1887, he married Mattie Woodruff, a noted opera singer. From that time the couple was very active in the Cincinnati Conservatory of Music.

WIlliam McAlpin died in 1899, and the store continued in popularity, expanding westard in 1901 into the adjacent six-story Morgan building. McAlpin's is one of few department stores to occupy the same buildings from its inception as a retail store throughout its whole life. 1901 saw the installation of McAlpin's famous clock on 4th Street.
McAlpin's became associated with the New York wholesale firm of H. B. Claflin & Co., and when that firm failed, the Cincinnati concern was thrown into receivership, ultimately emerging as a subsidiary of New York-based Mercantile Stores Corp. Under Mercantile leadership, it prospered, and the store was rebuilt in its 75th anniversary year of 1928. By the time of a further remodel in 1934, the company had 500 employees.
Escalators were first installed in the building in 1948, and McAlpin's celebrated its centenary in 1952. For a few years in the 1950s, Mercantile's other Cincinnati store, The Fair, was consolidated with McAlpin's familiar 4th Street store. The store was known as McAlpin's 6th Street, but closed in 1956. At the time of the consolidation in 1951, McAlpin's operated a small store in Paris, Kentucky, and acquired the Knott Store of Middletown, Ohio as a branch operation.

A pioneer in suburban branch development, McAlpin's opened stores in suburban shopping plazas, which were so popular that they were expanded multiple times. In 1967, the store entered the Lexington, Kentucky market and added a second store there four years later.
A beloved member of Cincinnati's "big four" department stores, McAlpin's prospered downtown on fourth street for many years. Known as the most value-oriented of the stores, it nonetheless offered familiar service and served a broad clientele who particularly appreciated McAlpin's food services, ranging from the popular "Kopper Kettle" on the main floor to the more elegant Tea Room upstairs. Frequent remodeling, and a modern 1960s storefront helped the building masque its age and remain up-to-date.

Downtown Cincinnati appeared to have a bright future, but by 1980, retailers began to lose the battle in the face of suburban competition and retail consolidation. Across-the-street competitor Pogue's was merged into Indiana's L.S. Ayres & Co., thus loosing its own identity, and closing by 1988. Deterioration of the retail district began to set in with the takeover of Mabley & Carew in 1978 by Dayton's Elder-Beerman. That store closed a few years after, in 1985, leaving only Shillito's as a competitor up on Race Street.

By 1992, McAlpin's had moved its executive offices to its suburban Kenwood location. It was announced that the downtown store had become unprofitable. When the city of Cincinnati subsidized Shillito's (by then named Lazarus) move to smaller quarters on Fountain Square, McAlpin's made it public that it would close the venerable 4th Street store if it could not be accommodated in the same development.

Lazarus prevailed at Fountain Square West, and McAlpin's left downtown in February of 1996. By this time the store had opened large suburban branches at Eastgate (1991, causing the closure of the 1959 Cherry Grove store) and at Tri-County in 1993.

The McAlpin name disappeared from the Cincinnati landscape with the purchase of Mercantile stores by Dillard's in 1998. McAlpin's had served the Queen City for 146 years.