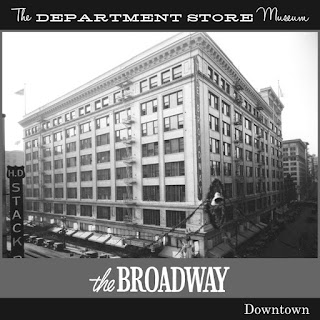 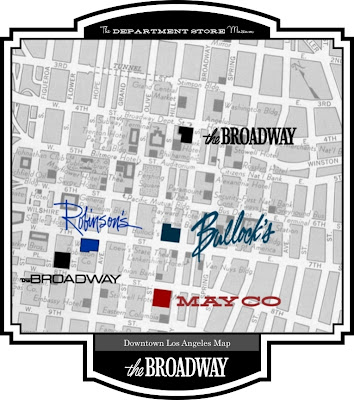 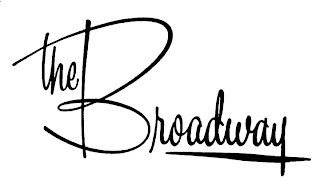 Arthur Letts, founder of The Broadway, was born in the small town of Holdenby, Northamptonshire, England, in 1862, and went on to become one of the richest and most influential men in Southern California. While the bulk of his wealth came from the retail powerhouse he built, his journey from the bucolic English countryside to California was, for the most part, an uphill one. After leaving school at age 14, Letts worked in a dry goods firm, first as an apprentice, and moved to London where he remained until he reached 21 years of age.

By 1883, he had crossed the Atlantic ocean, and worked in Toronto, again in the retail business. Letts married in 1886, and relocated to Seattle in 1889, but the city suffered a catastrophic fire three days after his arrival, and the business in which he had found employment burned to the ground. Undaunted, he opened his own shop in a makeshift tent, but his enterprise met with failure and subsequent bankruptcy due to the financial panic of 1893. Paying his creditors only .35 on the dollar (though he later made good on his debts), Letts relocated to Los Angeles, and leased a dry goods store at the corner of Fourth Street and Broadway, then the southern end of Los Angeles’ retail district.

Named The Broadway Department Store, Letts’ establishment prospered quickly due to its policy of fixed prices and liberal returns. An early slogan of The Broadway was “All Cars Transfer at Fourth and Broadway” because trolley lines converged at the store’s corner.

As with many talented and successful people, Letts recognized talent in others and in fact drew talented people to the organization he founded. John Gillespie Bullock, born in Paris, Ontario, in 1871 was one such person. He joined The Broadway in 1896 and so distinguished himself that in twelve months he was appointed buyer, and later manager of the store. It is interesting to note that when Letts acquired a lease to a new department store building under construction further down Broadway, he suggested that Bullock take over the enterprise with his backing, and indeed Bullock’s, another of the city’s great department stores, was related to The Broadway through Letts.

The Broadway outgrew the handsome building it occupied, and in 1913 revealed plans to demolish half of its structure and take over space in the adjacent Clark hotel building, which fronted on Hill Street. In place of the old building would be erected a 9-story department store building “in a commercial adaptation of the Italian Renaissance style.” The company stated at the time that “the earth will be ransacked for merchandise” to fill the 470,000 sq. ft. building. When the first half of the planned structure opened in February of 1914, the Los Angeles Times described it as an “imposing and harmonious structure,” while Letts stated in an interview that “I am most pleased that my people, those who have worked so faithfully, can have plenty of heat, plenty of light . . . during their hours of downtown life.”

Letts suffered a nervous breakdown due to overwork and contracted pneumonia during convalescence.  Just prior to his death in 1923, he purchased the Wolfskill ranch in the Westwood district of Los Angeles, and planned to develop a district of grand estates which he named Holmby Hills, loosely based on the name of his native town in England. His son and son-in-law continued the development, which is today one of the most exclusive residential enclaves in the world. The Broadway was subsequently led by Arthur Letts, Jr., and indeed, at the time, the store’s management reminded customers that the elder Letts “left us the foundation stones of the business: truth, courtesy, liberality, and value” and that these principles would continue to guide the organization.

In fact, the store was being expanded when Letts passed away. The 10-story addition on Fourth Street opened in 1924, adding 128,000 sq. ft. to the store which was now an anchor on the north end of the Broadway retail district. Subsequently, in 1926, the estate of Arthur Letts sold The Broadway to its executives, and the business was renamed The Broadway Store, Incorporated.

The Broadway grew by acquiring smaller retailers. It purchased B.H. Dyas, which had just built a new store in Hollywood, in 1931. The store was christened The Broadway-Hollywood and was a major retail presence in “tinsel-town” during its heyday. Likewise, the purchase of Milliron’s in 1950 and Walker’s in 1956 gave The Broadway instant branches in Westchester and Long Beach, respectively.

A major event in 1950 was the merger of The Broadway with Hale Brothers of San Francisco, which operated department stores in Oakland, San Jose and Sacramento, as well as Weinstock’s in the latter city. The holding company was named Broadway-Hale stores, and went on to acquire The Emporium of San Francisco and Capwell’s of Oakland, which had operated together since 1927.

The Broadway entered the San Diego market in 1961 by purchasing Marston’s, a leading retailer, which operated independently for a few years before taking the Broadway name.  In 1968, the Broadway purchased Korrick’s of Phoenix, and by subsequent expansion in Arizona, Nevada, and New Mexico, formed a separate division known as The Broadway-Southwest.

In the Los Angeles area, The Broadway began branch expansion in earnest with a striking art-deco store on Pasadena’s Colorado Boulevard. A similar store anchored the Baldwin Hills Crenshaw Plaza in 1947, a pioneer planned shopping center. With the help of its architects, The Broadway developed a signature look for its suburban stores, which numbered in the thirties by 1979. Earlier stores (including those in Arizona) were composed of a large mass of patterned block which used the Southern California sun to great advantage. Some, such as the Cerritos, Northridge, and Newport Beach stores were surrounded by a colonnade of thin pillars, and others, like the Carson and Phoenix Metrocenter branches were characterized by a brutalist geometric design composed of overhangs and deep recesses. The Broadways later branches were more simple compositions of warm masonry, often with rounded or chamfered corners.

A firm favorite of middle-class shoppers, the Broadway dominated its market area and competed directly with The May Co., which served a similar market.   Even though it was not as exclusive as competitors Robinson's and Bullock's, its stores had a unique style which was appreciated by the public, and recognizable throughout the region.

As the public’s taste for designer names grew in the 1970s, the store responded by introducing “Signature” and “VIP Collections” in its department lineup. In the area of hospitality, the stores’ restaurants were popular casual dining locations, initially called “The Terrace Room” in many cases. Later the restaurants were re-branded “The Chafing Dish” and were well-patronized by The Broadway's customers.

The area in which the large downtown Broadway store began to decline in the 1960s, and by 1973, a replacement was built as a component of Broadway Plaza, a mixed-use development which also included a shopping gallery, an office tower, and the first new hotel built downtown in many years. Its opening was widely heralded as progress for downtown Los Angeles, even though its presence on Seventh Avenue, across Hope Street from The J.W. Robinson Co., meant that the traditional Broadway retail corridor – which the eponymous store abandoned – suffered continued decline.

Epilogue
The Broadway’s holding company was renamed Carter-Hawley-Hale Stores in 1972 “to reflect the contributions of its executives.” In reality, the name was often derided as “Ego, Inc.” by analysts, and the company went on an aggressive buying binge, acquiring Neiman Marcus, Bergdorf Goodman, and Canada’s Holt Renfrew luxury stores. In the east, Carter Hawley Hale gobbled up Thalhimers of Richmond and John Wanamaker. The Broadway stores also expanded in San Diego and into Colorado as well. This strategy involved enormous debt, eroding Carter Hawley Hale’s bottom line. The company declared bankruptcy in 1991, was downsized and reorganized into a new "Broadway Stores, Inc.," but was shortly thereafter taken over by Federated Department Stores. In the final transaction, The Broadway’s historic Los Angeles area stores were converted into Macy’s or Bloomingdale’s by Federated, depending on location.